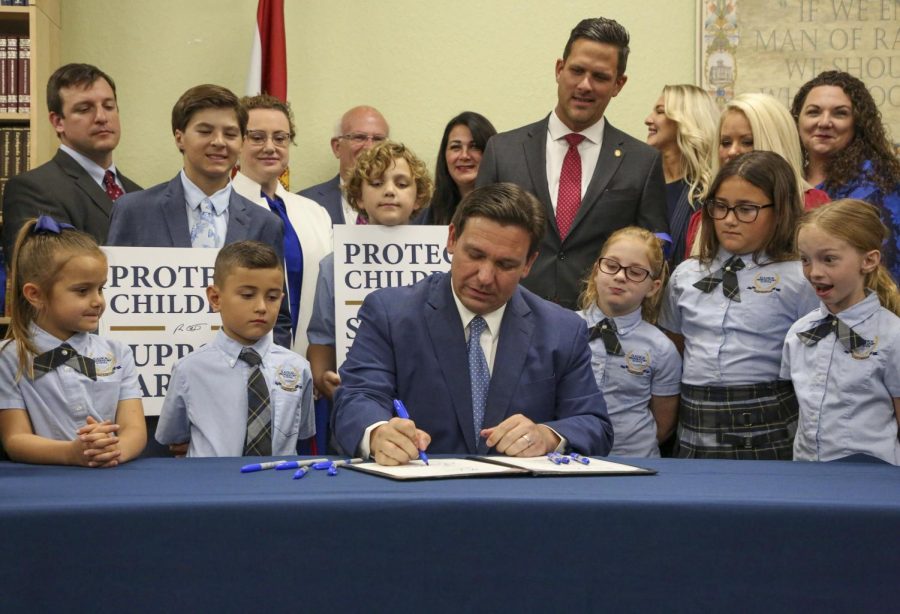 Could it Find its Way to Our Schools?

On March 28th, 2022, Florida legislation passed the Parental Rights in Education bill. The claimed intention of the bill is to let parents be more involved in what information is being taught to their children. One goal of the bill is to “prohibit classroom discussion about sexual orientation or gender identity in certain grade levels,” says the Florida House of Representatives website (I recommend looking at their website and other sources of information to learn more about the law).

The bill seems relatively harmless on the surface, but a deeper look reveals that its vague details can be used in a harmful manner in a broad array of circumstances, most notably its potential to marginalize the LGBTQ communtiy.

The bill has drawn widespread public criticism from all around the country, particularly the left wing, including President Joe Biden, who called the bill “hateful”; Florida state Representative Carlos G Smith (who is gay), Florida students have staged walkouts in retaliation, and the Walt Disney Company, an avid force in Florida politics, has suspended political donations in the state.

Many are wondering why the bill was introduced in the first place. Elementary schools, notably kindergarten through third grade, do not teach the subjects targeted by the bill. As quoted to Al Jazeera, Andrew Spar, president of the Florida Education Association, said, “This bill is based on a falsehood, and that falsehood is that somehow we’re teaching kids inappropriate topics at an early age, and clearly we’re not.”

Oddly, Florida legislature vetoed an amendment that would define exactly what “sexual orientation” and “gender identity” mean. These two terms are never specifically mentioned in this bill.

Another controversial decision of this bill is that it would require by law school counselors to report to the parents if a student told them they were gay or trans, even if it would be harmful to the student.

“Outing LGBTQ people to their parents creates a whole other form of distrust in the school system from children, and if/when outed to homophobic parents, the results are almost never good.” – Senior Nathan Uzmack

Obviously, this bill is exclusive to Florida, but that is only temporary. In Texas and Ohio, there have been calls for copycat bills to be introduced. It is only a matter of time until this topic makes its way to Pennsylvania, regardless of what PA citizens think of it.

The average PA citizen will naturally form their own opinion about the bill, but ultimately this will have the most direct effect on the kids in our district.

“It’s to have schools not discuss anything sexual (sexual orientation, sexual beliefs, ect.) to young children in the age range of kindergarten-3rd grade,” said one Knoch student on the purpose of the bill.

Some think the bill’s intent is to protect the youth, but others believe the goal is to bar children from the real world.

“I think they are trying to shelter children. It’s all about control these days. Why would you want to limit a child’s education on how the world goes around? We should teach children what it is and [that] it’s okay to be the way they are, even in k-3. They should know about it so they don’t feel alone,” said one Knoch student.

If this bill were to become a part of PA law, kids of all ages would see dramatic changes in their daily lives. Grades K-3 would be most directly affected, but any major differences brought by the limits in classroom discussion would be shown a few years after implementation.

“I think it would even further suppress the already widely closeted LGBT community in the youth of Pennsylvania, which is the opposite way this country needs to be going,” said senior Jack Iole, who is openly gay. “It would be harmful to these children who are already scared of their own sexual/gender identity and already have many people speaking against homosexuality and other gender and sexual alignments. It can potentially psychologically damage these children for years to come and make normal life even harder for this group of kids that already have it hard.”

While many think that this bill will have detrimental effects on the LGBTQ community, some think it will have no effect or even a positive one.

“I believe it will remove mass confusion about sexuality and their preference in men or women, so I believe it’s worth trying to implement,” said junior Ryan Thompson.

One of the most heated points of debate for this bill is who it is meant for. The writing claims it is for ages K-3, but there are many other parts written in that have many questioning its target demographic.

“It’s so kids do not have to learn about something that is way beyond their age. Emphasis on kids, not active gay adults. Kids that have no idea and should have no input on the matter,” said a Knoch student.

Another anonymous student said, “I believe the bill is purely meant to keep topics that aren’t meant for children out of children’s minds. I believe kids should not be taught about sex at such a young age and once they hit the appropriate age for a sex ed class, they can be taught and can discuss these things.”

Those opposed to the bill frequently argue that it does not address any issues of the education system in Florida, or in the United States in general. Most can agree that children ages K-3 should not be learning about anything sexual, but some believe those kids aren’t learning about this in the first place.

“The issues that it states it wants to address are almost irrelevant (who is teaching 3rd graders about sex???) and the other issues that it is aiming towards are NOT ISSUES! Kids should be taught about gender and sexuality in order to make people more accepting of different sexualities,” said another student.

“I think it could go both ways. Some people would say that it would take care of some things, but most kids don’t learn about these things until middle school so it shouldn’t matter if it was passed anyway. The bill wouldn’t stop anything in the lower grades, because most students don’t know what this is in the first place,” says one student.

Iole says, “I think that children should not learn any sexual content until a certain age, especially not between K-3. But, when they do learn about sexuality, they need to learn that is it is more fluid than what biology states.”

This is controversial because the bill is spearheaded by its solution to teaching kids K-3 anything sexual, yet plenty believe that was never a problem to begin with. The result is legislation that is in itself a possible double entendre: It would be hard to disagree with a ban on the teaching of anything sexual for kids K-3, but the other vague wordings might open the door for homophobic practices.

Ultimately, with copycat bills already emerging, citizens all across the commonwealth are aware that legislation similar to this will almost inevitably be considered and debated by our politicians soon. It’s hard to say if Pennsylvania citizens would be in support of such an act as it seems almost everyone has a different take, ranging from full support to absolute disdain, and everything in between.

“I think we should leave it a law in Florida for at least two years to see what effect it has on schools, communities, and children before we would implement it in Pennsylvania,” said one student.

Senior David Stull says, “Should this bill be PA law? Never! It forces students’ parents to know what they say, which can put them at greater risk if they don’t support what their child prefers.”

It might be a while until this bill would reach PA legislation, but the situation is inevitable, and its possible that it could already be having an effect on our schools. In the middle school, the “LGBTQ ally” signs were taken down right around the time this bill was passed. It’s unknown whether this is pure coincidence or inspired by motives related to the bill. Dr Foley says that the district is working to make a policy that is inclusive and helpful for teachers, students, and parents in the high school and the middle school.

“I think that the LGBT community, especially youth, needs to be protected and learn about the fluidity of sexuality along with all other children when it is time, when they are at the proper age, and in a healthy balanced way. I think that more needs to be done to investigate the motivation of bills like this. Plus, campaigns need to show the public why this kind of thing is bad and harmful to LGBT children and how the public is being slyly manipulated so they can make more educated political choices.” – Anonymous Knoch Student 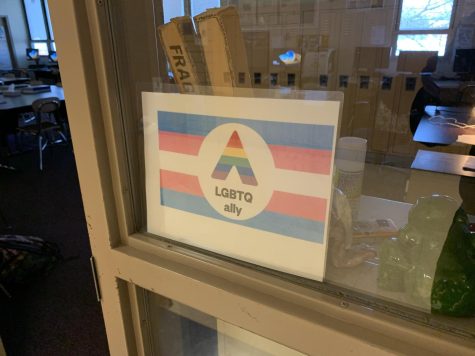 Generally, it is hard to tell the stance most Knoch students and parents generally take on this bill, but it is not difficult to find students opposed to this bill in the district. The most popular concerns of our students often reflect that of the general population; many believe that although there are some agreeable points, the bill is written in a vague manner that could allow for possible loopholes to be abused, which could in turn be used to attack the LGBTQ community.