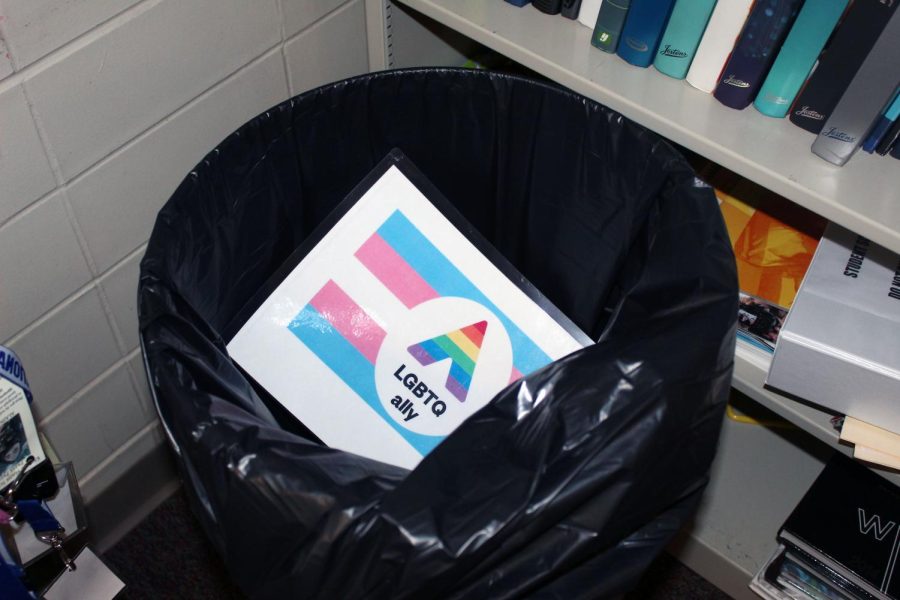 Two Steps Forward, One Step Back: How the School Board is Debating Classroom Decorations

Recently, the school board voted down a policy regarding classroom decor. The policy would have made it possible for school board members and administration to decide what is and isn’t appropriate room decor for a teacher based on whether it is controversial or political.

Now, what did the policy exactly mean by controversial? Well, the initial document given to the teachers regarding the policy wasn’t exactly clear. It said, “Controversial matter includes[…]Concepts, images, slogans, or phrases that appeared in the media and have been associated with controversy or a movement or cause.”

But, of course, that was a very vague description that was, in many’s opinions, open for interpretation.

The policy was not passed, but the vote was followed by an administrative directive for teachers that says, “displaying materials that are not directly related to the educational activities and/or curriculum taught within the classroom/instructional setting. The term materials includes, but are not limited to, displays, signs, posters, fliers, banners, flags, and decorations.”

Junior Ali Rhodes, Secretary of the Youth and Government, interpreted the initial policy as saying that, “any sign, poster, decoration, etc. that is not the American Flag could be taken as controversial matter. This includes any material involving events such as the Civil Rights Movement and Women’s Suffrage.”

For reasons easy to see, this policy could have been particularly dicey for history teachers.

Mrs. Lemmon, history teacher and YAG advisor, was particularly worried about the effects this policy would place on the LGBTQ+ community and other minorities groups at our school who’ve been historically and currently affected by censorship in education.

“You don’t have to agree with [the decorations/those events], but they did happen. And, not displaying these signs and posters [isn’t] going to make the facts go away,” she said.

Mrs. Lemmon also brought up the importance of classroom decor and the purpose it serves.

“A lot of educators take a lot of pride in the space they provide to the students,” she said.

Mrs. Lemmon discussed how when she was in college, her professors always emphasized to the teachers-in-training the importance of creating a warm, welcoming, and safe environment for their students. She also pointed out that the Diversity / Inclusion signs that were previously hung up around the school were taken down, despite being distributed during a training session for teachers.

According to several teachers, the reason the “LGTBQ safe space” signs were removed was because of a political website URL printed at the bottom. But will they be replaced? According to the directive, they will only be hung in the guidance office.

Lemmon said that those signs are not only helpful for the LGBTQ community at our school to know who to trust, but it might also help any other marginalized groups at this school to feel more comfortable around a teacher.

As someone who is part of that community here at Knoch, I can confirm that it is sometimes difficult to feel comfortable around a teacher if you aren’t sure whether you can share that information with them or not. In that kind of situation, it’s simply not safe enough to just assume.

Rhodes said, “The signs were supposed to help provide kids with faculty they could trust and go to if needed, an attempt to help prevent anxiety toward school. Taking these signs down, not only leaves students without knowledge of a safe space, but in doing so completely contradicts the new mission statement. With this policy in place, the school is no longer student-centered, or future-focused, contradicting two of the school district’s goals for the children enrolled.”

While I, and many others, can be grateful that the policy wasn’t passed, many teachers still took their posters down preemptively.

How did other students feel when these were taken down all of a sudden? Did it feel like the teacher was ‘taking back’ their support? How about the school?

Many students didn’t seem so happy about the removal or the proposed policy. It would be an understatement to call Rhodes, “unhappy”.

Some students, on the other hand, believe in the effectiveness of a directive like this.

Senior Jake McCurdy, who has been in a heated debate with Rhodes, believes that the policy would keep schools more focused on the curriculum. For McCurdy, LGBTQ+ issues fall under topics that should not influence the classroom in any way, and thus believes there is no reason to keep posters like the Diversity/Inclusion posters.

“This policy [will] cause the classrooms to be more educationally focused,” McCurdy said.

While I disagree with his verdict, I can see the appeal of not having classrooms decorated with ideas you think might be harmful to students. However, I must posit that if school is a place to learn, learning about other viewpoints should fall under that umbrella, and that kids have the right to learn about the world and opinions around them.

Senior Mackenzie Protos had some ideas on how the district could work in a better, more clear and fair manner that doesn’t put at-risk groups at our school directly under the opinions of the board members, parents, teachers, or other outside influences.

“I think this has the potential for good, if modified, but because of the unclear wording there are many [groups] that this could hurt,” said Protos. “Teachers should be able to display what they want as long as it isn’t hateful or forceful.”

Protos suggested some alterations to the policy and some of them apply in the directive.

“It should be case by case always,” Protos said.  “I would take away words like ‘offensive’ and ‘controversial’ as their definitions are becoming more and more unclear in our society, and simply ban hateful, harmful imagery [in a way that would not affect LGBTQ+ material].”

As of now, if teachers were asked and refused to take down “materials that are not directly related to the educational activities and/or curriculum,” they could face consequences as far as being fired. In a conservative area, I feel that it’s not hard to predict how this could go down.

Now, I don’t have any personal connections or anything against any of the board members or know what their opinions are on bare minimum progressive topics like LGBTQ+ youth rights, but I don’t want to take my chances when my values could differ from theirs.

As someone who predominantly spends time with theater kids, this isn’t usually an issue I run into. Our entire generation is just generally more diverse and progressive. But, at the parental level, having conservative or traditional opinions is just simply the norm.

All in all, anyone reading the initial policy could tell what it’s trying to remove around the school: the LGBTQ+ friendly posters and material. One could argue that the policy was trying to remove hateful classroom materials that would harm these groups, but that simply isn’t an issue at our school.

Several of those I have talked to keep bringing up how this rings close to the recent laws in Texas and Florida regarding LGBTQ+ topics in the classroom, specifically how the laws are used against a problem that doesn’t exist, sexual education in elementary school, as a way to restrict the LGBTQ+ community that is always considered sexual no matter the situation.

This school district is already hard enough on LGBTQ+ and other minority groups via some poor peer and parent attitudes. There’s no reason to take away even more from these kids.

As previously stated, at the last school board meeting, the policy did not pass. Junior Paige Wilson  (link) spoke on the policy at the meeting and brought up several reasons why it shouldn’t be considered. The majority of the board members agreed. However, one must ask where the policy is going now. If next to none of the board members were even considering it, why was the directive emailed to all of the faculty?

It remains that minorities will always be considered inherently political, even when they don’t want to be.