Basic Is Out, Vsco Is In 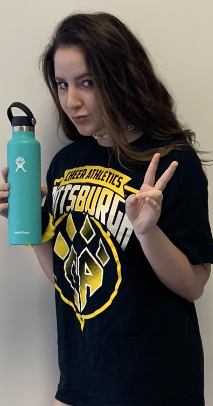 It used to be the “basic white girl” look: Ugg Boots, Eos Chapstick, and Starbucks. But we have evolved as a society. Basic is out, Vsco is in.

The word Vsco is a term generally used as an insult for a young woman who posts trendy pictures of herself edited on the app Vsco.

“A Vsco girl can be either a girl or a boy who enjoys TikTok, Hydroflasks, Scrunchies, and Oversized Hoodies,” said senior Sarah Massa.

If you have the app TikTok or Instagram, then you have probably heard about the “Vsco girl” trend.

A must have for all Vsco girls is a Hydroflask. A Hydroflask is a stainless steel water bottle.

“My Hydroflask is turquoise. I also have another one that is neon pink,” said Massa.

Fresahman Hallee Hassler is considered a Vsco girl because she has a Hydroflask and she wears scrunchies.

“I didn’t know I was a Vsco girl, but I don’t really care,” said Hassler.

Another Vsco item is to make friendship bracelets and put it on the side of your Hydroflask.

All of the Vsco girls either wear Birkenstocks or Vans. Birkenstocks are German sandals and Vans are are an American manufacturer of skateboarding shoes.

“I like Vans better because I think they are more comfortable”, said Hassler.

“My favorite Vsco item is my Hydroflask. They’re such a nice water bottle, they keep your water cold all day and you can decorate them with stickers”, said Massa.

Being a Vsco girl for a lot of people probably isn’t a big deal.

“I mean I think it’s okay, but I don’t really care that much,” said Brunner.

Vsco girls make up sayings that are weird to some people, but I guess they like them.

“Sksksksksk and I oop, is a saying that Vsco girls like to say”, said Hassler.