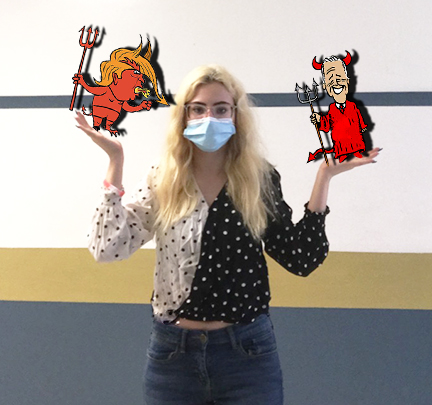 Unless you live under a rock, you’re surely aware of our country’s upcoming election and all of the controversy surrounding the two main candidates: Donald Trump and Joe Biden. Everybody and their mother has an opinion on why one is better than the other and the opposing side is a DANGER and a THREAT to our nation’s wellbeing. It seems that every year is the “Most Important Election Year” and whatever choice we make in November will define our history for better or for worse. While voting and making your voice heard is always of the utmost importance, this year is like none before. 2020 has shown us how reliant America really is on a great leader with COVID-19 as well as racial unrest, tensions, and police brutality.

Donald Trump has failed us as Americans and as people.

Even before he was elected into office, numerous women spoke out about his unwanted sexual harassment/assault towards them. While he brushed it off as “locker-room talk,” the allegations have only grown bigger in number and scarier in story. I’ve questioned his supporters on how they can still support him after hearing of his despicable actions. All of them have either blatantly denied that any of the 25+ women were actually assaulted, or they disregard it completely and say it’s not relevant to our country in terms of “economics” or “politics.” How sad that we as a country have prioritized our country’s financial state over genuine humans themselves. Is this the “Great America” that Trump has made in the last four years? Is Trump Making America Great Again? By electing Trump into office, Americans have shown all the young people of our country that you can get away with touching someone without their consent and still be placed into a position of power. These women have been put on blast by the conservative media, Republicans, and even Trump himself. They have belittled survivor’s experiences and shamed their characters.

What’s unique about this election however, is that the Democratic candidate Joe Biden ALSO has allegations against him. Eight women have said that they were uncomfortable around him because he would invade their space or make unnecessary comments about their bodies. One of the women has said that she was assaulted by Joe Biden, while the other seven said that his behavior did not amount to sexual harassment or assault.

So what are we to do?

As young people, this is most likely the first election you’ve truly paid attention to and cared about. If your politics fall anywhere in line with mine, you’re probably in a bit of a moral dilemma, too.

I can’t vote for Trump because then I’ll be going against what I stand for politically and morally, but if I vote for Biden I’m STILL not being 100% true to myself. I’ve thought about voting third-party for either the Green or Libertarian candidate, or even writing in Bernie Sanders.

While straying away from the traditional two-party system and voting for someone other than the standard Republican or Democrat may be popular enough to be effective one day, sadly it is not right now. Many aspiring voters I’ve talked with have mentioned that they would like to vote third-party, but they know deep down the person won’t get in and we’ll be stuck with a president we don’t want. I’ve heard the phrase “Vote Blue No Matter Who” more in the past few months than ever before. I’ve found that the majority of liberals and progressives do not support Biden–they simply want Trump out of office, no matter the cost. If you feel like you’re choosing the lesser of two evils by doing this, then be my guest. If you simply can’t morally vote for someone with several allegations made against them, whether that be 25 or 8, then vote for a third-party candidate or write someone in you feel comfortable with. Or, if you just want to get rid of Trump and simply vote Democrat, then settle for Biden.

As for those that support Trump and blatantly ignore or deny the allegations made against him, I urge you to do your research and question your beliefs. There is no shame in changing something you believe even if you’ve stuck with it your whole life. Keep the same energy you have against Biden for his allegations that you do for Trump, and maybe we as a country can uplift each other and provide hope and closure for anyone that has been a victim of sexual violence and actually Make America Great Again.

I asked some students to share their thoughts on some controversial topics surrounding President Trump.

A: My thoughts on his sexual allegations are that they are so true. There are countless women that have come forward and have solid proof that they were sexually assaulted by Trump. And also him being friends with Jeffrey Epstein makes me believe the women 100x more.

A: I think so, as long as it’s not done as a joke. Like in 2016 when people wrote in Harambe or other things like that. If it’s someone who is running for the position, it’s acceptable to write in a candidate!

A: No not at all. In one of the recent interviews from March he said he didn’t want to cause panic, but instead covered up that he knew there was a problem. He could have followed CDC’s recommendations more. And on the terms of BLM, he could have shown that most protests were peaceful. Only a handful turned violent due to anti-BLM groups. He seems to just turn his head to the problems going on in the country he is running.

A: I just think that we are living in a political climate where there is really no right choice. Some Republicans don’t like Trump, and some Democrats don’t like Biden. It’s a struggle right now. And many people are scared to share their opinions because of the fear of being harassed or something along those lines.

A:  A rapist doesn’t deserve to be in office and represent a country.

A: Obviously people are allowed their own political views and vote who they see as the best fit but, Democratic and Republican votes are the majority and voting for anything else will not be reflected.

Question #3: Do you think Donald Trump has done enough for our country in terms of COVID-19 and the recent Black Lives Matter movement?

A: I feel as though if he would have done something sooner cases could have been prevented but who would know what to do in these situations. Him openly disagreeing with Black Lives Matter and change not being made to the system is very unsettling. How are human rights still being debated? Seriously?

Question #1: What are your thoughts on President Trump’s sexual assault allegations?

A: I think we should keep the same energy we do with all sexual misconduct allegations, and believe survivors. Not only does he have a history of sexist remarks but he has countless allegations of misconduct as well as the sexual assault allegations. After taking everything into consideration, I think it’s very clear that even if he isn’t a pervert, he is a misogynist.

A: Well of course it’s acceptable, everyone has the freedom to vote for whoever they choose. But do I think it’s smart? No. If we go down the same route we’re on now for another 4 years we’re not only gonna hurt this country in so many ways but it could have irreversible effects on the planet and the climate crisis. So personally, with the situation at hand, I don’t think it’s responsible to vote third party, but everyone’s choice is their own. I’d just suggest doing your own research and educating yourself before voting.

A: Not at all. Nope. No. He chose not to take COVID seriously and here we are. We’re behind all the other countries in terms of reopening and recovery and it’s because he chose not to take it seriously. And now hundreds of thousands of U.S. citizens are dead. And his way of accusing peaceful protesters of being TERRORISTS is racist. No matter what you say it is racially motivated. Armed anti-lockdown and armed anti-mask protesters that included literal neo-nazis and KKK members were called “very good people” by our president, but citizens enacting their freedom of protest are called terrorists and thugs. This is a direct result of our president being RACIST. Also don’t forget Donnie’s daddy was a proud KKK member!! People seem to forget that. Donnie has the same attitude with systemic racism in the police system as he does with COVID and the climate crisis: ignore/deny the actual problem and find someone else to blame.

A: There’s a quote I really like. “A government doesn’t announce it is fascist it declares anti-fascists enemies of the state.”