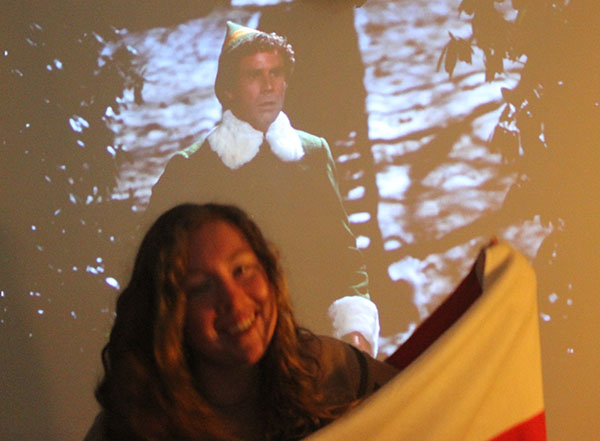 Sorry for the awful photo...

Also, I got the movie summaries from Google.

“As the holidays approach, Clark Griswold (Chevy Chase) wants to have a perfect family Christmas, so he pesters his wife, Ellen (Beverly D’Angelo), and children, as he tries to make sure everything is in line, including the tree and house decorations. However, things go awry quickly. His hick cousin, Eddie (Randy Quaid), and his family show up unplanned and start living in their camper on the Griswold property. Even worse, Clark’s employers renege on the holiday bonus he needs.”

This movie is so funny.  It may be slightly inappropriate for younger audiences, but it’ll probably go right over a kid’s head. It was released in 1989. Overall, it’s a good movie that I thoroughly enjoy watching.

“Divorced dad Scott (Tim Allen) has custody of his son (Eric Lloyd) on Christmas Eve. After he accidentally kills a man in a Santa suit, they are magically transported to the North Pole, where an elf explains that Scott must take Santa’s place before the next Christmas arrives. Scott thinks he’s dreaming, but over the next several months he gains weight and grows an inexplicably white beard. Maybe that night at the North Pole wasn’t a dream after all — and maybe Scott has a lot of work to do.”

This one is pretty funny. The sequel is also really good, although the third one is just okay. It was released in 1994.

“Nine intertwined stories examine the complexities of the one emotion that connects us all: love. Among the characters explored are David (Hugh Grant), the handsome newly elected British prime minister who falls for a young junior staffer (Martine McCutcheon), Sarah (Laura Linney), a graphic designer whose devotion to her mentally ill brother complicates her love life, and Harry (Alan Rickman), a married man tempted by his attractive new secretary.”

I’m a sucker for a love story, even some that end sadly. Also, Colin Firth. Need I say more?

“Buddy (Will Ferrell) was accidentally transported to the North Pole as a toddler and raised to adulthood among Santa’s elves. Unable to shake the feeling that he doesn’t fit in, the adult Buddy travels to New York, in full elf uniform, in search of his real father. As it happens, this is Walter Hobbs (James Caan), a cynical businessman. After a DNA test proves this, Walter reluctantly attempts to start a relationship with the childlike Buddy with increasingly chaotic results.”

I LOVE this movie!! It’s so funny.

The Shop Around the Corner

“Alfred Kralik (James Stewart) and Klara Novak (Margaret Sullavan) are employees at Matuschek and Company, a general store in Budapest. Klara and Alfred are constantly at odds with each other, butting heads and disagreeing on almost everything. Both are enamored of their respective pen pals, who serve as welcome distractions in their lives. Little do they know, they are each the other’s pen pal and, despite outward differences, have unwittingly fallen in love through their letters.”

I cannot say how amazing this movie is. It’s black and white, and usually plays on Turner Classic Movies.

The real question is: is King Moonracer a toy? I think not, but that’s just me.

The Year Without a Santa Claus

The real stars of this show are Heat Miser and Snow Miser. I always liked Snow Miser better. Also, the story is so sweet.

How the Grinch Stole Christmas

Santa Claus is Comin’ to Town

Simply, the best. I’m a huge fan of the animation style, and the story is so sweet and so wholesome. Watch it.