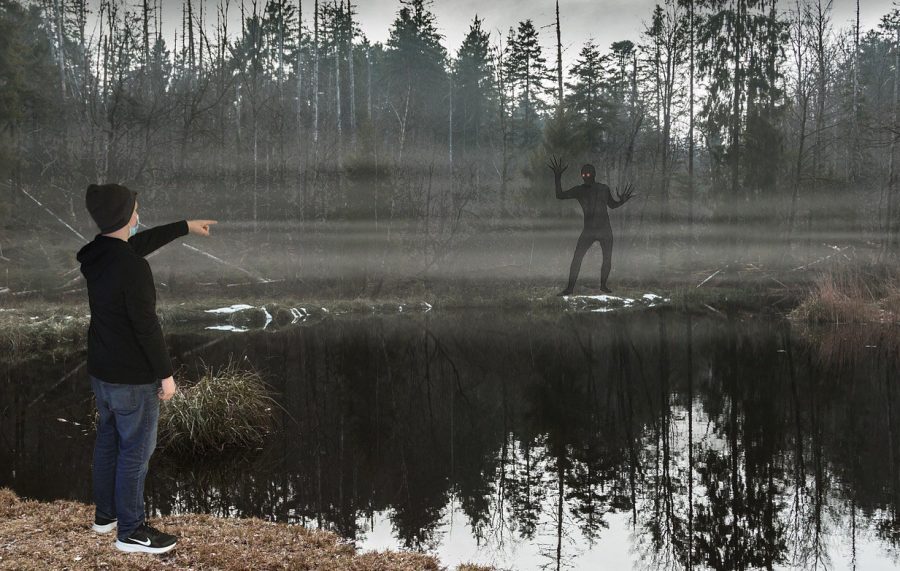 Jorden Mackie, Photo Editor
We were driving my friend’s really old beat up Subaru through a massive graveyard. We stopped and walked down a hill and came across a little pond. There was someone sitting on a rock on the other side of the pond. The figure was all black and we couldn’t make out any features other than the fact it looked like a man who was wearing some old-style top hat. We stupidly waved and shouted “Hi!”. He didn’t show any acknowledgement and continued sitting still on the rock. All of a sudden, he jumped to his feet, started running to us on the water and then vanished in thin water about halfway on the pond. My friends and I screamed and ran back to the car.

The car wouldn’t start, and we heard something banging on the back of the car. It wasn’t a constant bang, but every few seconds or so we’d hear it. Nobody was outside from what we could see in the dark, but something was making a noise on the car. I opened my phone and started dialing my mom to come give us a boost, but I had no service. None of us had any cell service. The next 30 minutes were spent trying to get her car started. No banging was heard afterwards, but we felt this heavy pressure around us.

Finally, the car started and she hit the pedal to the metal. We sped out of the graveyard so fast. Immediately crossing the gates, all of our phones regained cell service. One thing I know for certain is that someone or something was out there, and it was not an animal or a human.
–
Delete Image
Align Left
Align Center
Align Right
Align Left
Align Center
Delete Heading