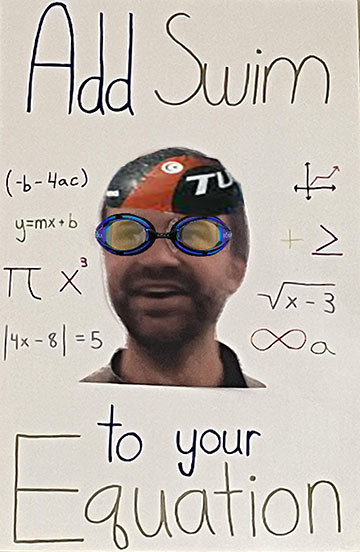 If any of you are enrolled in one of Mr. Springer’s classes or walk in the halls, which I would think to be the majority of you, there’s no doubt you’ve seen one of the swim teams pleas for a male recruit.  Considering how much effort they put into their posters around the school, you would think that they’d be SWIMMING in new members, but that doesn’t quite seem to be the case.  To find out more information about the swim team and corresponding promotions for it, let’s hear a few words from the athletes and seemingly enthusiastic fan girl, Kevin Springer.

For those of you who are unfamiliar with the swim team’s situation from last year, the team was very small with only one boy swimmer, Caden Traggiai, who has graduated.  Since then, the team has gotten a few new water flailers, but are still treading water until they get enough boys to qualify for a relay team.  Seeing as they only have three boys and the requirement is four for a complete team, as freshman Adrian Lavorini explained, they are desperate for one more boy member.  Because there is no relay team, our swimmers are doomed at every meet they go to, giving away free points as a result of their inability to participate in a number of events. 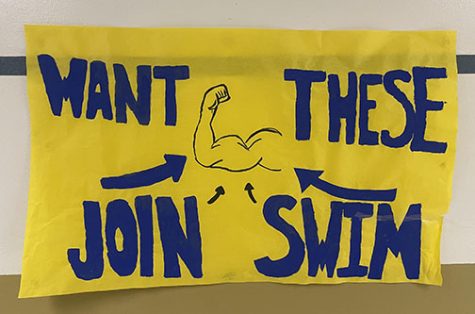 If that sorry situation isn’t enough to convince you to join, one of the big appeals that the signs around the school keep emphasizing is the promise of muscle growth, which is music to the ears of all the Body Gen gym rats and Gymshark wearing bros.

“You get strong shoulders,” said Lavorini, who has been swimming for eight years ever since his mom made him learn so that he wouldn’t drown.  Talk about motivation!

Adding to this point, sophomore Lindsey Mack proclaims that, “Your back will get jacked” and you’ll get, “ripped and in shape.”

Not only does Mack praise the muscle growth that swimming provides, but she also provides some clarity concerning the lore of the posters and signs.  According to Mack, Miss Clarke, assistant coach of the swim team, also happens to be the girlfriend of the school Calculus teacher, which explains the prominence of signs in his room.

The aquatic sophomore said, “The notes on the board are all her, and then we put the posters up, [like] the big poster of his face.”  She seems very proud of that poster, adding that she took that picture herself.

Walking into room 514, you may think that you’ve accidentally stepped into some kind of ad making class, or the room of a very self centered man, but don’t be fooled; it’s only the room home to many a breakdown and superstar spokesman Mr. Springer. 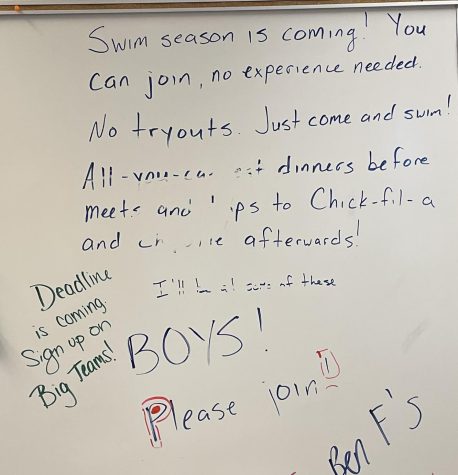 On his opinion of being the literal poster child for the swim team, Mr. Springer said, “I’m the only person even peripherally related to the swim team in this building, so it makes sense to me.”

He also showed great pride and enthusiasm for the team, saying, “They swim.  They’re fine.”

Not exactly the kind of reaction you may be expecting to hear from this swim legend, but he did bring up another intriguing point as a last ditch effort to convince the boys of Knoch High School to join.  Point being, “If you want to hang out with girls…”  to which junior Emma Haugh, who was listening in, said, “More gal pals, more fun!”  So true Emma, adding onto an ever growing list of reasons to go swim for the ol’ gold and blue!

So if you ever have an inkling of interest in the swim team or want to know more about it, the team and coaches will be more than happy to talk to you and get any kind of attention whatsoever.  Admittedly, swimming is not a very well-known sport in this school, or at least it hasn’t been for as long as I’ve been aware, but don’t let that dissuade you from joining and trying out a new skill that you might be really good at!  Also, just throwing this out there, but Mr. Springer has been known to attend a number of meets, so do with that what you will.  Seriously though, JOIN THE SWIM TEAM!!!!!!!!!

If you have any questions, you could talk to Ms. Clarke in the middle school or the head coach Dominique Patrick by means of her email, [email protected] 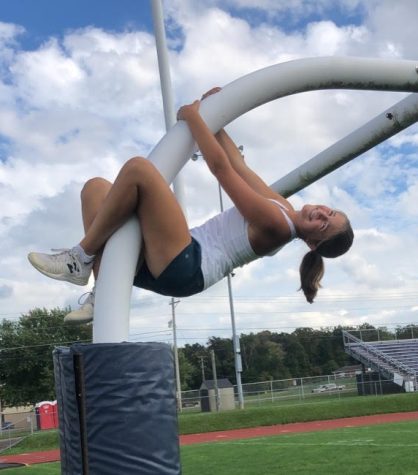