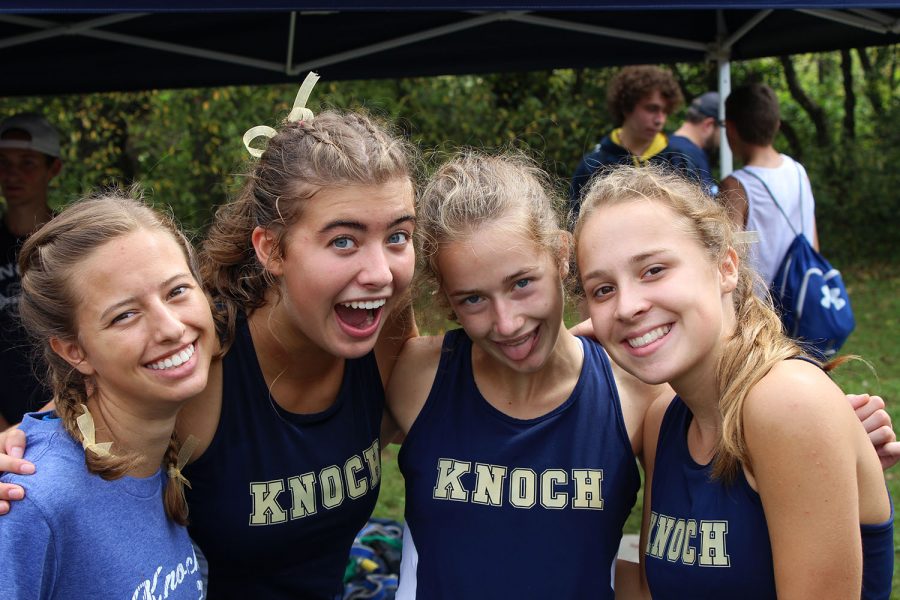 Don’t Run From This Article, Run for Knoch!

This article is long like a cross country race, but both are worth it.  Please, don’t leave me just yet–I know running for fun seems like a bad idea, but I promise you–it isn’t.

“Most people don’t know that cross country runners have a lot of fun,” said freshman Elyse Chess.  “I feel like a lot of people think we just run and suffer constantly.” 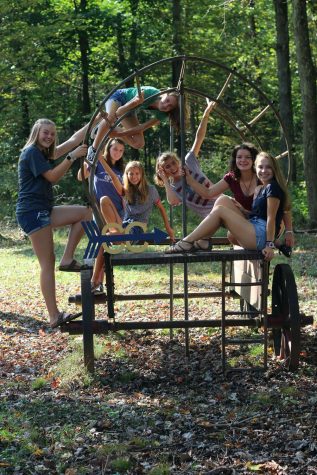 I thought that too at first.  The only sports I knew were soccer and hockey, and never in a million years did I think I would drop them both to run competitively.  I didn’t exactly make the choice myself–a concussion did, knocking me out of all contact sports.  But yes, at first, it was a little weird to be involved in a team sport that was still so individual.  In the summer, we would run at the Rails to Trails in Cabot, and anytime someone wasn’t looking, I would walk.  Eventually, I didn’t have to do that anymore.  Now, 8 miles at the trails is only challenging due to the pace I set, not the distance.  It’s a good feeling knowing how much I’ve grown since my 7th grade walking days.

“Sure, we’re working really hard, but we’re having a lot of fun while we’re doing it,” said Chess.  “Cross country is one of the most rewarding sports–you really get to see your hard work pay off as your time drops over the course of the season. Plus, the team is so supportive. You all become really good friends.”

Elyse, the one that I make fun of the most at practice (it’s all lighthearted, I swear…) is one of my favorite people.  She surprised everyone this summer when she jumped right into the workouts with ease, and I’m very excited to see what she can do this fall.

“Cross country is hard (at times extremely hard), but joining was one of the best decisions I’ve ever made,” said Chess.  “It’s so much fun and I’ve made a lot of great friends through it. Anyone who joins won’t regret it.”

The entire atmosphere of cross country is like no other sport.  I don’t remember the last time we ever dealt with drama or any other issues–everyone on the team is a family.

Junior Will Crytzer, or “Roadkill Will” as we like to call him (that will be explained very soon), has been on the team since middle school.  I like to think the girls have the craziest stories to tell, but the XC boys?  Let’s just say they get into all different types of shenanigans, the majority of it a secret.  Will filled me in on a few of his favorite memories. 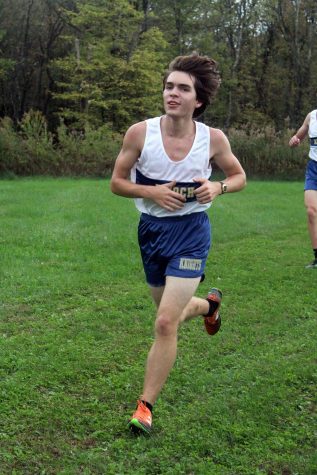 “It’s hard to pick a single moment that’s my favorite, but getting hit by that bike in 7th grade was definitely the most memorable,” said Crytzer.

Hence the nickname.  Even though it was 5 years ago, I still remember the day Will was almost flattened by a biker during a long run.  But honestly, it’s the everyday stuff that makes us look forward to practice.

“Some of my more notable memories are seeing Coach Brahler smile for the first time ever, going out to dinner with the team, getting popsicles after hard practices, and going on long runs at Rails-to-Trails,” said Chess.

Long runs are the best stress-relieving activity.  Any anger or anxiety from the day immediately subsides as I step into pace with my friends, gossiping about who’s dating who or random topics (“Do you think they ever, like…get bored of each other after dating for so long?” “if you committed a crime, I feel like it would be because you hurt someone for not recycling”, “Let’s see if we can only talk in Spanish for the rest of the run”).  We’ve memorized Rails-to-Trails every curve and milemark, we know exactly when to put our noses in our shirts when passing the turkey farm…long runs are by far the best runs.

“We found an inflatable, toucan-shaped inner-tube hidden on Rails-to-Trails.  It was pretty far, we had to carry it probably 4 miles back. It’s somewhere on the XC course now,” said Crytzer.  “Also, there’s a decently sized creek in the woods behind the school, so I know what we’re doing next year.”

From camp, invitationals, and everyday practices, there is always something going on.  Junior Amelia Walls, my sidekick since 7th grade cross country, has been through it all with me.  States, weird guys that hit on us at meets, lemonade stands to raise money for the Foundation Invite…too many memories to count.  Unfortunately, some of them aren’t too fun to remember.

“At the Cal U invite, all of us girls were about to run our 5k. We went on a quick bathroom break and water break. You couldn’t see the finish line from where we were. I was with Elyse Chess and we walked up the hill to the start of the race and saw everyone on the line ready to go,” said Walls.  “Elyse and I sprinted to the start and didn’t even have time to put on our spikes.  I will never forget the rush I had in that moment.”

That day was by far the worst memory of cross country.  Every single girl in the race was lined up, waiting for the gun–there were a heck of a lot of people there, too.  I was still in my Pittsburgh Penguins pajamas that I sometimes wear over my uniform, and everyone saw me sprint to the starting line, trailing Elyse and Amelia.  The starter (man with gun) didn’t give a crap what was going on, and I don’t blame him–it was our own fault we were scrambling around like maniacs.  Even the cameraman pointed his camera at me as I embarrassed myself for eternity.  I had nightmares for days.

But of course, that one race did not define our season.  We work too hard throughout the summer and fall to let little things like that take away from our achievements, girls and boys.

“The reason XC is so great is that there is a lot of independence,” said Crytzer.  “Most of the practices are unsupervised, i.e. we run off and don’t see Coach until the end of practice.  This is really nice because it lets us set our own pace and like I said before, 90% of the practices are us just running wherever we want, and I love that.”

One time, we found a tire on the side of the road near Friedmans.  We all thought it would be a great asset to the shrine.  I was a freshman, so I put it upon myself to tie the thing on my back with my jacket and lug it back to the school.  I still remember laughing at the strange looks I received from passing cars, my teammates cackling along with me.

Oh, and I should probably mention that the shrine is a pile of road signs, shopping carts, a Christmas tree, and other rando junk in the middle of our cross country course.

“Everything has to be stolen,” said junior Braden Zukowski.  “Except the Christmas tree.”

Braden and I were the only two to make states this year, and I am so thankful he got to join me in Hershey.  One of my favorite things about cross country is finishing the race and getting to watch the boys afterwards.  Sophomore year, I ran then had nothing to look forward to but rushing home to go to the Snowball dance.  On normal meet days, you’re on a runner’s high from the excitement of being done: cheering on the boys is 100 times more fun. 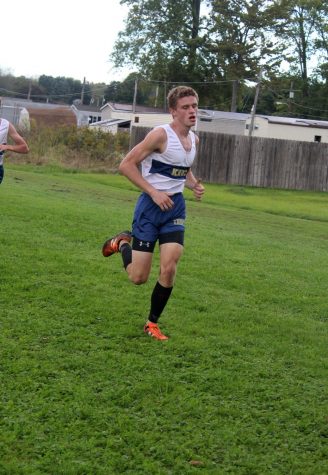 “My favorite memories are Holden driving the van after States and camp,” said Zukowski.

Another thing that leads people away from cross country is the myth of Coach Brahler.

“Here’s the thing about Brahler.  You’ve probably only seen him in middle school gym, and I agree that in that class, he’s a scary, angry guy, but put yourself in his shoes.  Middle school has some REALLY annoying, trouble-making kids in it, right? He needs to be an intimidating guy or else no one will listen to him, and in middle school gym, that is really important,” said Crytzer.  “In cross country, he doesn’t have to deal with the trouble-makers so he doesn’t need to act the same way, and honestly he’s a pretty cool guy if you talk to him (outside of MS gym).”

Coach is really good at what he does, and it shows.  Knoch has had a wide range of talent over the years, and he has been able to turn potential into something.  I have a lot of respect for him, and I’m thankful that he always pushes me to be my best.

“Most people probably don’t know the encouraging and positive attitude of the one and only Mr. Wess Brahler,” said Walls.  “You probably had him in gym class and remember him being very stern. When you join the cross country team, you see the more vulnerable side of him. He has a deep passion for running and you can tell he puts his all into this team.”

“He’s actually a good person and genuinely cares about the team and the athletes,” said Zukowski.  “You’ll realize that Brahler is pretty chill…sometimes.”

Sometimes, meaning don’t be an idiot 24/7, or he will be mad.  Yes, cross country is fun, but you still have to work hard.  That’s another great quality of Coach–he isn’t a pushover.

“He’s intimidating until he goes full-on Dad Mode during cross country season,” said Chess.  “Once you’ve seen him be so nice to the team during the season, you can never really be intimidated by him again.”

“He’s one of my favorite coaches I’ve ever had (and trust me between 11 years of swimming and many track seasons with different coaches, that’s saying something),” said Walls. 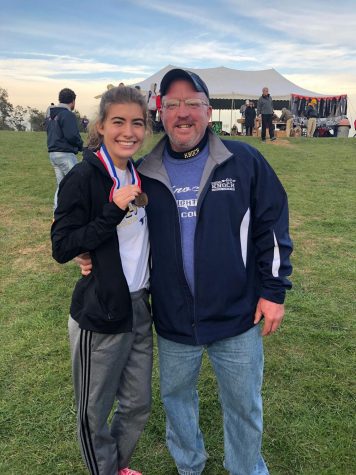 Just last year, we were so close to winning a section title.  With a few more girls, we could make it happen.

“Cross country is not all about the running.  It’s more about building yourself up and finding a way to achieve your goals,” said Walls.  “You don’t have to be good at running.  Cross country teaches you to be disciplined.  It allows you to do things you’ve never done before and achieve goals you never thought you would.  If you want a team full of encouraging, positive, and motivational words and actions, join the cross country team.  It will change your life.”

The bonds made with other runners from different schools.

Playing zombie tag in the woods on an easy run day.

That one parent whose voice you always recognize in the middle of the race.

Encouraging your teammate’s successes as though they are your own.

This is cross country.

I know I wrote a long article, but if you can’t tell already, it’s something I’m passionate about.  I want to share this sport with as many people as I can because it taught me the most about myself, more than anything else in my life.  Maybe it will do the same to you.