“What they don’t realize is this: Yes, they frighten me, but I have always been scared, since the day I got here. I was raised by a man who murdered my parents, reared in a land of monsters. I live with that fear, let it settle into my bones, and ignore it. If I didn’t pretend not to be scared, I would hide under my owl-down coverlets in Madoc’s estate forever. I would lie there and scream until there was nothing left of me. I refuse to do that. I will not do that.” Holly Black The Cruel Prince

Of course I want to be like them. They’re beautiful as blades forged in some divine fire. They will live forever.

And Cardan is even more beautiful than the rest. I hate him more than all the others. I hate him so much that sometimes when I look at him, I can hardly breathe.

Jude was seven years old when her parents were murdered and she and her two sisters were stolen away to live in the treacherous High Court of Faerie. Ten years later, Jude wants nothing more than to belong there, despite her mortality. But many of the fey despise humans. Especially Prince Cardan, the youngest and wickedest son of the High King.

To win a place at the Court, she must defy him–and face the consequences.

In doing so, she becomes embroiled in palace intrigues and deceptions, discovering her own capacity for bloodshed. But as civil war threatens to drown the Courts of Faerie in violence, Jude will need to risk her life in a dangerous alliance to save her sisters, and Faerie itself.

You know you like a story when even after you read the book for the first time if you had to go to Barnes and Noble to buy a hardcover copy of it. This statement was true in my cases for this book.

Holly Black most know her readers fall more into the darker fantasy part of book readers. So when the story opens with a murder that leaves the sisters orphans to an extant I was hooked line and snickered.

Ten years later is when the book picks up. The three sisters are now living in Faerie, with the man that killed their parents. Jude and her twin want to fit in in a place where they know in their hearts they never will.

With twists and turns that are beautiful but cruel, you’ll never set it down. Jude, the main person, made choices that were a mystery until the very end.

The plot of the book was slow at first, but it built towards the final chapter and the next books in the series. I have already bought the next book and looking forward to January seventh when the last book comes out.

MORE QUOTES FROM THE BOOK:

“Nice things don’t happen in storybooks,’ Taryn says.’or when they do happen, something bad happens next. Because otherwise the story would be boring, and no one would read it.” Holly Black The Cruel Prince

“They talk about honor, but what they really care about is power.” Holly Black The Cruel Prince

“I love my parents’ murderer; I suppose I could love anyone.” Holly Black The Cruel Prince 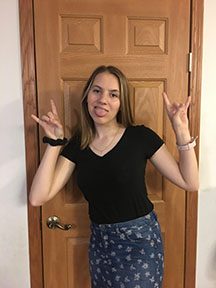 HELLO, human beings. I am Bryn Krason a "suffer"more at this school. I like to sleep and read. I also learn random things that most people don't care to...