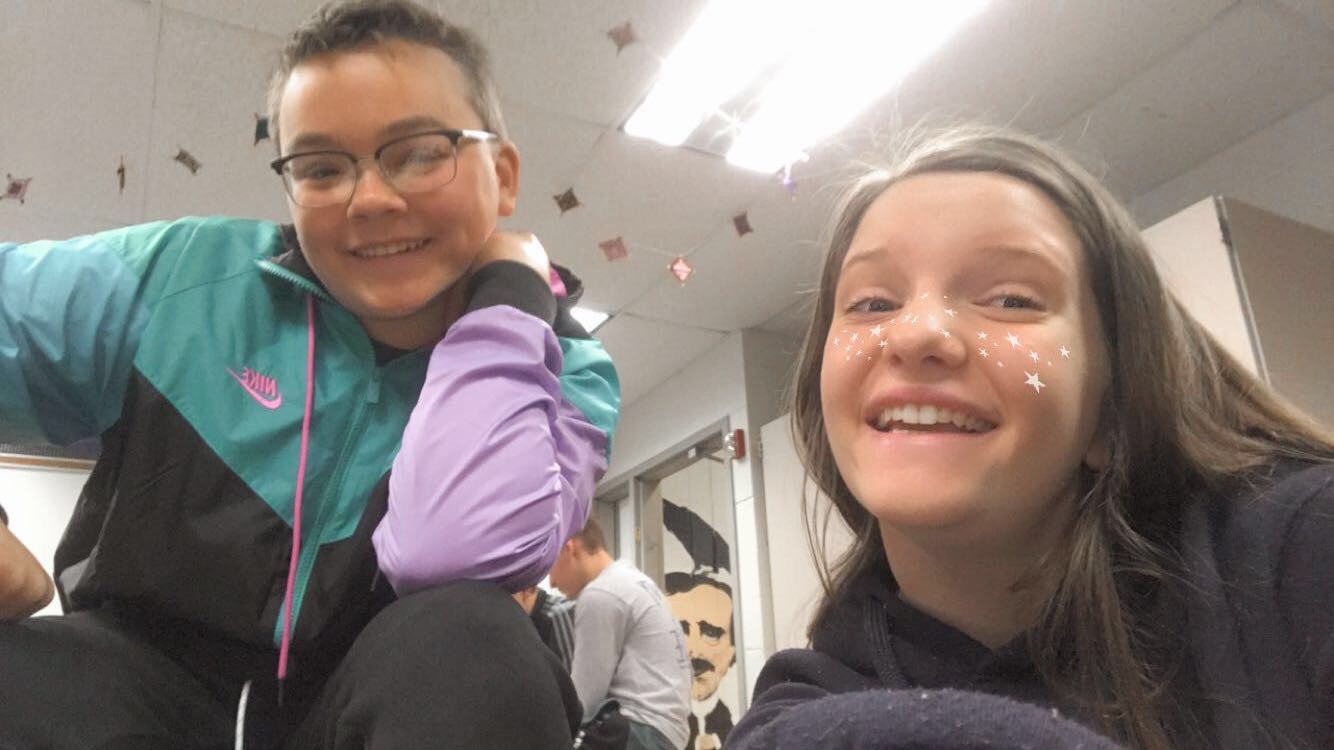 Have you heard of the most active tik tokker at Knoch? She’s the  girl who is always trying to get your snapchat account or to join your tik tok . Well… you should be thinking of freshman Hanna Howell.

Howell has made a name for herself by being a super outgoing, very sassy, and a downright hilarious person.

“I have probably made around 50 tik toks with her.  We’ve done almost every tik tok dance,” said friend and tik tok companion, freshman Carly Fraser.

Howell agreed that they spend a lot of time making videos.

Howell does so many tik toks that even her teachers have noticed.

“I don’t think I’ve ever seen her record one in my class, but I’ve definitely seen her do the dances, I believe she tried to teach me a dance in between classes,” said Mrs. Lemmon. (Hanna’s history teacher)

“Eden and I did one in her class once!” said Howell, disputing Mrs. Lemmon claims it doesn’t happen in history.

History is not the only class where Howell makes videos.  She admitted that orchestra was not her favorite class this year, so she may have wasted a lot of time on her phone.

When not making tik toks, Howell is never afraid to speak her mind or to give her friends a hard time.

“She laughs at me when I cry,” said Howell’s best friend,  freshman Chloe Burkert.

Howell said she can’t help it.

“Her crying is so funny.  It is literally the funniest thing. She’s going to kill me, but it’s so funny,” said Howell.

Despite the crying thing, her friends say Howell is great. ”

“Yeah, going to the movies is probably my favorite thing to do with Chloe,” said Howell

The girls enjoy spending their time together, whether it is comparing boys to fruits, making tik toks, or learning history!

“Hanna and Chloe have a list of fruits that disguise boys at Knoch. This is a way they gossip without others knowing. They spill me all the tea,” said Mrs.  Lemmon.

And how did Mrs. Lemmon crack their code?

“Yeah, me and Chloe told her at a basketball and game. We spilled the tea to her about everything.” said Howell.

We wonder if the girls kept up with their work while social isolating.

“Through this whole quarantine, I really miss seeing Hannah in class and interacting with her. I even miss her complaining about the work I gave her!” said Mrs. Lemmon.

So, next time Howell wants your snapchat or tik tok, don’t be afraid to say yes.

“She is really funny, caring, and is great to get along with. She’s  weird like me and a really good friend to have because she is always there for me and supports me,” said Burket.

2 Responses to “Tik Talking About Hanna”