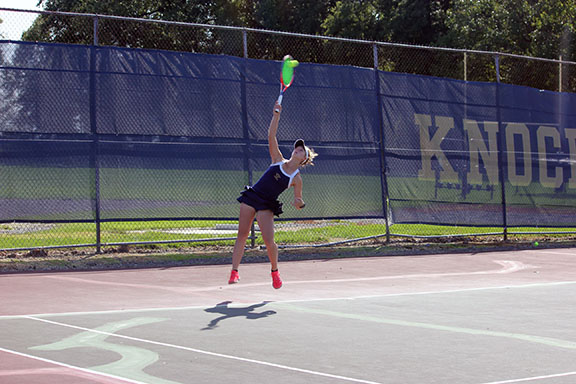 Lack of fans didn’t mean a lack of performance

When the weather gets a little colder, the nights get a little longer, and the snow starts to fall, that can only mean one thing for my fellow athletes. The door for fall sports is closing, and the door for winter sports is opening! But, before we can rush into how we think our favorite winter teams will do, we need to recap how our fall ball players did this year. So, without further ado, this is how your favorite sports teams did from this past Fall!

Starting off strong, we have our girls tennis team. To say that these girls are used to being the best would be an understatement. These girls dominate the  AA conference every year, with multiple players making multiple appearances to sections and states.

Laura, who has recently made her commitment to the University of Dayton,made history this past fall, winning four straight WPIAL titles. This is a feat that no past girls tennis player had ever accomplished

“I was beyond excited,” said Greb. “After saying a good match to my opponent, I walked off the court and was immediately embraced in the arms of my parents and coach. They were all so happy and proud of me.”

Although Laura, along with the rest of this strong senior class of players, may be moving on, it will be exciting to see how this young core of players does following the recent success of this star senior class, and the senior classes in prior years.

“It feels great; I have so much respect for all the previous runners,” said Formica. “It feels really good to top their times knowing how successful they were.”

Mike Formica went on to win the WPIAL championship, followed by teammate and senior Daniel Deal, who placed 15th, and freshman Austin Haugh, who placed 57th. Formica then went on to place 11th in the AA states race. With runners like Mike and Daniel paving the way for the underclassmen, it’s going to be exciting to see how these key underclassmen will do in the years to come.

When teams came to play this 2020 volleyball team, they walked out with one thing in mind.

Although this team finished the season 4-9, the record doesn’t show just how good this team truly was. With a big class of seniors, this team truly had a lot of veteran prowess. And with that much veteran talent, it’s always fun to watch and see them play out on the court. Even though the season didn’t go as planned for this 2020 group, the future is always bright for this team.

The 2020 season showed an immediate turnaround from a disappointing 2019 season, with this season sporting a post season playoffs appearance.

Although the varsity team, coached by Coach Malcom Cook, lost in a heartbreak game to Franklin Regional, the team really showed how to come back from adversity and had a great comeback season.

The team, led by a very strong senior class, will be looking to repeat another postseason appearance next year.

The 2020 year brought a 3-10-1 season for the Knoch Knights Girls Soccer Team, but the record doesn’t show the sheer talent of this team.

This team included a lot of gritty, hard working players, who weren’t afraid to get physical if it meant giving them a chance at a goal or making a save on the ball on defense. It was definitely fun to watch this group of girls go out and really work for every win they got, and I know that next year will be even better for this team.

Although this 2020 football season saw an unfortunate 0-7 season, there were a lot of bright sides to this team.

This season also showed a lot of underclassmen varsity debuts, like freshman Xavier Johnson playing both sides of the ball at Wide Receiver and Cornerback.

Although the season didn’t go the way that the players or coaches wanted, the team can look towards the future, with a freshman class of over 20 players, more than any on the team.

With such a large underclassman group, it will be exciting to see just how much these players will develop over the years, and how they’ll stack up to the competition in the future.

That just about wraps up all the sports at Knoch High School. Although no one likes to see their sports season come to an end, it’s exciting to see what the future holds for these young, up and coming athletes. To all the Knoch sports fans out there, make sure to keep an eye out for these teams next year, because they’ll be coming back better than ever!