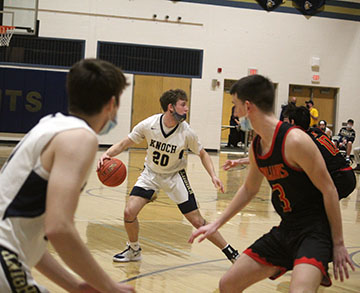 It’s finally time. January 4th, 2021, the date Governor Wolf is allowing winter sports to pick up after being postponed on December 12th, 2020.

“Swim meets will be super different, but the chlorine is strong enough to kill most germs,” said junior swimmer Caden Traggiai.

With school being totally online towards the end of November, it was only a matter of time before there would be a halt to winter sports. With COVID cases being at a high, athletes knew there wasn’t going to be much of a season.

“We had some tournaments get cancelled and we weren’t allowed spectators,” said senior wrestler Sam Freyermuth. “I was sort of expecting it to happen, so I wasn’t too surprised.”

Even if the athletes were expecting the sudden stop to their seasons, there is always the sense of disappointment. For some, it’s their senior year, which is supposed to be “your year.” But COVID decided to rain on that parade.

“I was upset [when the season was postponed], especially for the seniors,” said junior girls basketball player Lily Hawk.

There was definitely loads of disappointment when everyone heard the news. Some students were maybe not as shocked as others, but there was for sure a let down when sports were postponed.

“I didn’t have high expectations [for the season].

I knew something was going to go wrong, but I just lived in the moment to enjoy it”

Now that sports are technically allowed to start again, it was still a set back for many different athletes. With sports being postponed for a little over  three weeks, each athlete had to make sure to stay in shape while they couldn’t be practicing. But in that time frame, everything had to close. With only a few gyms staying open, the athletes had to take matters into their own hands. They knew they were responsible for staying fit for a hopeful return of  the winter sport season.

“We knew we had to stay in shape, so the boys and I had been grinding at the gym,” said junior Alex Cotton from the hockey team.

If it was going to the gym (if any were still open), working out in their own homes, online practices, going on runs; whatever it was, everyone had their own plans to stay in shape.

“I still get in some reps in the basement everyday and try to stay in shape and keep my ball handling skills sharp, but it’s also hard not being in the gym with the girls everyday,” said Hawk.

Every single athlete has their own sense of drive for what they do. No matter what obstacle would get in the way, they were ready to take on any challenge.